The Jack Lynch Tunnel was built using the immersed tube method which involved the construction of a large casting basin on the South (Mahon) side of the river Lee.
The excavation of one million tonnes of material, including 150,000 tonnes of limestone rock, and the preparation of the casting basin covering 21.6 acres or 8.75 hectares was itself an unprecedented engineering challenge in Ireland.

Inside the 350 m long and 250 m wide casting basin the five tunnel sections along with the northern approach ramp (‘boat’) section were built. Each tunnel section weighs 27,000 tonnes

The Jack Lynch Tunnel runs under the river Lee. At the North portal of the tunnel the ring road joins the M8 motorway to Dublin and the N8 road to Cork city centre, with the N25 continuing East towards Waterford.

The National Roads Authority with funding from the Cohesion Fund, European Union 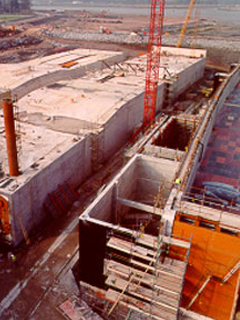